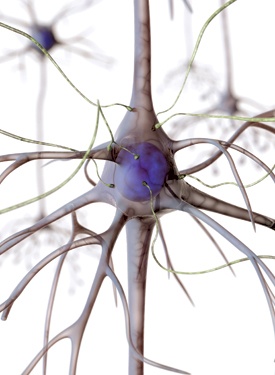 Neuroscience is the study of the nervous system within an organism. Development of the peripheral and central nervous systems begins early in embryogenesis and can be tracked through use of lineage markers specific to each stage of neuronal development. Neural stem cells are derived from the ectoderm and differentiate into neural crest cells, glial progenitor cells, and neuronal progenitor cells. Markers for neural stem cells include nestin, musashi, and NeuroD. The neural crest further differentiates into a diverse array of cell types including neurons, glia, craniofacial cartilage, and connective tissue, and is sometimes referred to as the fourth primary germ layer. Neural crest markers include FoxD3 and notch1. Glial progenitor cells develop into astrocytes, which provide structural support and help form the blood-brain barrier, and oligodendrocytes, which form the insulating myelin sheaths that surround axons. Neuronal progenitor cells, which can be identified using the markers CEND1 and EOMES, give rise to mature neurons.

Neurons are the building blocks of extensive neural networks. Synaptic signaling occurs when the signal from one neuron is transmitted across the synaptic cleft to another neuron through the action of neurotransmitters. These neurotransmitters, such as dopamine, glutamate, and GABA, are stored in synaptic vesicles in the pre-synaptic neuron. Upon receiving appropriate signal, the vesicles fuse to the pre-synaptic membrane and release their contents into the synaptic cleft, resulting in neurotransmitter binding to one of several receptors on the postsynaptic membrane. Receptor families such as the dopamine receptor, which is a GPCR, can signal through adenylate cyclase to activate PKA and other signaling intermediates to regulate gene expression through the actions of CREB and other transcription factors. Other neurotransmitters bind ion channels such as NMDAR or AMPAR that regulate flux of Ca2+ and Na+, thereby perpetuating the action potential through the post-synaptic neuron.

Devastating diseases arise from loss of neuron structure or function and are generally known as neurodegenerative diseases. One of the most common neurodegenerative diseases worldwide is Alzheimer’s disease (AD). It is characterized by the presence of extracellular amyloid plaques that form through abnormal APP processing and aggregation of β-amyloid peptides. AD is also characterized by the formation of neurofibrillary tangles that result from hyperphosphoryation of the tau protein. Parkinson’s disease, another neurodegenerative disorder, occurs when genetic mutation or environmental toxins result in misfolded α-synuclein protein that aggregates to form lewy bodies. These aggregates alter dopamine signaling, ultimately leading to neuronal dysfunction and cell death.